Huo Hou (Fire timing) is an essential element of Asian cultural cooking. Even chefs with rich experience in gas use have a hard time explaining how to control the fire perfectly. They are used to and want to be able to control the temperature based on observing the strength of the gas flame. Natural gas cooking was once considered a necessary condition for creating Asian flavors. It is not difficult to understand that gas cooking will always have a strong supporter.

However, advances in induction cooking have changed the consciousness of some people and become the hottest trend in restaurant kitchens. More and more high-end and professional chefs are induction cooking enthusiasts. And they have realized: “commercial induction cookers are available to mimic the taste of flame cooking, and not only because they are considered the environmentally friendly alternative to electric or gas stoves.”

In China, many restaurants are willing to invest in commercial induction cooktops. Because of the main cooking habits of stir fry, commercial induction woks have become the best cooking solution for restaurants serving Asian cuisine. A round-bottomed wok with a raised pair of earrings provides the high temperature needed for stir-frying and other cooking ways.

In China, most traditional woks have a round bottom design. You may be surprised when a chef at a Chinese restaurant is setting aside the traditional open flames and waving an iron pot on a commercial induction stove and tossing food.

The commercial induction wok cooker range is the combination of traditional and modern induction technology. This flameless cooking option works by generating electricity when the device is powered on and has a compatible cooking container. The alternating magnetic field affects the molecules in the cookware, heating only the cookware and its internal contents. The curved shape means that the eddy current generated by the induction coil can heat to the bottom and sides of the wok, allowing the heat to transfer to the food in all directions.

Professional chefs in China recognize this sleek new technology because it combines both traditional wok elements and is more effective, accurate, safer, and more flexible than traditional gas stoves.

How does a commercial induction wok cooker heat food evenly?

Unlike direct heat transfer from an open flame, it uses the principle of the magnetic field induced eddy currents to heat and cooks a container. High-frequency (16-40KHz) current generates an alternating magnetic field through a toroidal concave coil. When the currents pass through the iron-pot conductor above the concave glass-ceramic, countless eddy currents generate and make the pot heats the food at high speed. Please note that once the power turns off or the pot removes, the induction currents will immediately stop the cooking process. 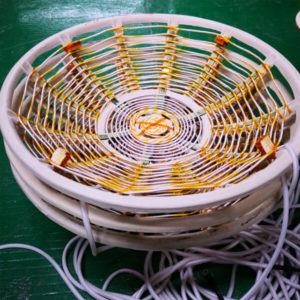 The induction coil is the core component of commercial induction cooktops. Without a coil working with the PCB chip component, it is impossible to generate heat. The quality of the coil directly affects the use effect. The use of evenly distributed high-frequency pure copper induction coil can effectively avoid the problem of partial firepower and ensure that food is heated evenly and efficiently.

How to use commercial induction wok cooker stove? 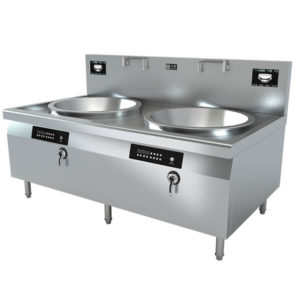 With the electrical installation is done correctly, cooking becomes easy, even if you have never used a commercial induction cooker before.

1) Turn on the power switch on the wall.

2) Place a magnetic concave round bottom iron pot on the glass-ceramic hob.

3) Turn on the power switch of the electromagnetic device.

4) Turn the knob control by hand and select the power level you want.

5) After cooking, turn off the power of the induction cooker.

How to know the power setting for commercial induction wok cookers? 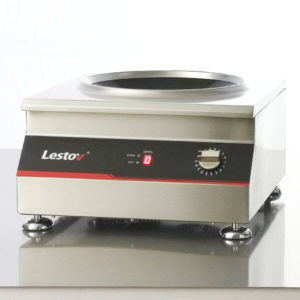 For Chinese restaurants that focus on Asian cuisine, the safety of induction cookers is a realistic solution to current restaurant fire challenges. The surface of the induction cooker does not generate heat, which directly avoids combustion burns and potential risks of gas pipelines. Essentially, commercial induction cookers are safer than gas stoves. A small amount of waste heat also keeps the kitchen cool. As magnetic wok is a direct transfer heat source to the food, more and more Chinese restaurant chefs are keen on the benefits of not heating the kitchen in hot summer.

In addition to the IGBT protection and wire coil protection functions set in the core components of the induction cooker, almost all induction cooking stoves have an automatic pan detection function. When the cooker leaves the cooktop from the left or right for 0.5 seconds, it will stop heating and enter the standby function; When the wok moves over the glass-ceramic, the height of the wok frying pan in the vertical direction exceeds 15 cm, it will stop or slowly heat up.

Why is it so designed? The traditional classic wok has been the container of choice for Asian cuisine, and its simplicity complicates the food it cooks. While considering security, the design of tossing and stir-frying within a reasonable height also meets the habits of Chinese restaurant chefs. By controlling the heat by lifting the pot and away from the open flame, it allows chefs to stir fry, steam, braise, and deep fry like they have been for hundreds of years.

Huo Hou (Fire timing) is a skill that requires learning curves and practice accumulation. Because commercial induction cookers have no open flames and fast heating speeds, so how to easily reduce or increase the heat through fast response to make the food substantially better is a test of the chef’s professional skills and knowledge.

Alexandre Couillon is the owner and chef of the Michelin-starred restaurant La Marine. He believes that the flexibility of induction cooking “allows us to expand our creativity … the induction cooker sublimates the quality of the product”. As other professionals have commented, induction cookers are no more difficult than the use of electric or gas stoves. Once you are familiar with the control of cooking time and power levels, there is no problem cooking consistently and changing the heat quickly. What you need to do is to prepare all the ingredients before you start.

“Powerful, immediate, precise, effective, practical-here in a few words are the qualities of induction,” says Author/Chef Thierry Molinengo of the Cristal Room Baccarat restaurant in Paris.

In the past few years, the technology of commercial induction cookers has made leaps and bounds while the price has dropped, which has attracted more Chinese restaurant chefs to switch.

Whether it is a gas cooktop or an induction cooker, the cooking equipment of a restaurant or restaurant must be able to meet the needs of heavy-duty cooking. For restaurants with Asian cuisine, choosing commercial induction equipment that has passed quality performance and safety tests is a more efficient way to use energy. Reducing energy consumption will have a huge impact on the health of commercial kitchens and your chefs.

How to Clean a Commercial Deep Fryer?

With high power, what should be paid attention to for a commercial induction cooker

Commercial induction hob manufacturers have over the years, increased progressively in the making of commercial…

Recent Posts
Copyright 2019© Lestov, Powered by sdwebseo
Back To Top